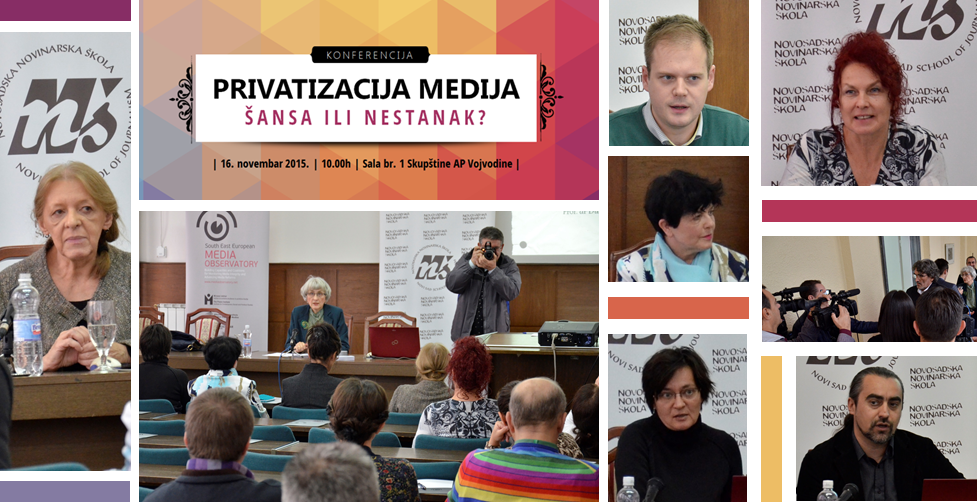 Discontinuing of multilingual media opens the window to assimilation

At the moment when almost half of the multilingual electronic media is threatened with discontinuation due to an unsuccessful privatization, Professor Dubravka Valić Nedeljković warns that informing in minority languages is not only a human right but also the social capital of a truly democratic society. At the opening of the conference “Privatization of the media – a chance or disappearance?” she said that it is difficult to speak about inclusion of minority communities without education and the media. National councils of national minorities took over the care of print media in minority languages, but the electronic media will have to make a strong shift in editorial policy – from state-centric to market-based model – if they want to survive and thrive. Having that in mind, the key question will be: how to ensure stable funding and independence of the media at the same time?

The Novi Sad School of Journalism research results show that out of 28 multilingual media included in the privatization process, only 13 were sold. Four media are irreversibly discontinued, while for the remaining 11 media the process of transfer of shares follows, if the employees are entitled to it. The minority communities in central Serbia are in the worst position, since they do not have their own program on the public service as minorities in Vojvodina do.

“For too long, too many people have believed that privatization will not occur, that the government would change its mind at the last moment,” said Žužana Serenčeš, the media expert of the Independent Journalists’ Association of Vojvodina. She believes that due to such unfounded hope the privatization process was carried out with indifference. Some optimism comes from idea on the establishment of community media in minority languages, although this model of establishment of media is so far very rare in Serbia.

Ana Makanova Tomanova, president of the Coordination of National Councils of National Minorities of the Republic of Serbia, has put the debate a step backward, reminding us of the possibility that the Law on Public Information and Media is unconstitutional, at least in the area of privatization, because the Constitution of the Republic of Serbia states that everyone have the freedom to establish media. In this way Constitution allows, and the law forbids to local governments to be the founders of the media. While waiting for the decision of the Constitutional Court on this legislative collision, Coordination of National Councils advocates for the continuation of work of multilingual media, regardless of their ownership structure. The financing model is less important than the rights of minorities to be informed, according Makanova Tomanova and adds that the electronic media are the keeper of the minorities living language, and that discontinuing of multilingual media opens the window to assimilation.

Kalman Kuntić from the Provincial Secretariat for Culture and Public Information said that the current informative system in Serbia, with its structure does not resemble the pyramid, but the funnel, primarily due to the neoliberal approach in the media market. Kuntić believes that there are two options: either we will have a strong and independent public service, with the establishment of public services at the local level, or this role will take over the stations like TV Pink. Miroslav Keveždi from the Institute for Culture of Vojvodina, said that the deterioration of the cultural system always provokes assimilation, and warned of the potential hazard to the identity in the name of market adaptation.

About the outcome of the privatization in Slovenia and Croatia, the only countries of the former Yugoslavia which became members of the European Union, spoke Rina Klinar from Radio Triglav and Melisa Skender, a freelance journalist from Zagreb. Examples of these countries show that the withdrawal of the state from the media market is not obligatory in the European Union, nor necessarily leads to strengthening of media diversity and pluralism. Melisa Skender stated that nowadays there are more media and less journalists in Croatia. In her opinion the key prerequisites of professionalism in the local media market are ensuring of integrity of journalists, setting the standards for subsidies and analysis of the impact of invested funds. Radio Triglav is a non-commercial radio station, and its survival required a lot of sacrifices from the employees. Rina Klinar argued that funding via subsidies exclude the possibility of long-term stability, “One year we received 100,000 euros, the next 20,000 euros, which clearly indicates the enormous uncertainty”. Journalists have repeatedly invested their own funds in the radio or voluntarily reduced their wages. However, Radio Triglav survives as a quality media with a high share of speech program.

Particularly interesting is the segment of the program in the Roma language, which is being prepared for a hundred members of this community in the Gorenjska region.

Jan Krasni form the SHARE Foundation spoke about the Western European practices. He studied the media in the Danish, Frisian and Serbian language in Germany. These communities have a regular program on regional public services, and they successfully launched online media. Minority media in Germany are the responsibility of the so-called “Community” of the minority, whose work is funded by the state.

If the national minorities are left without local media, but also without good quality informing on public services, they will be diverted to information via the Internet or the media from their native countries, and not to the media in Serbia, a country in which they should be one of the pillars of participatory democracy and actively participate in decision-making and policy-making process. Possible models to strengthen minority and multilingual media are the monitoring of the programs of privatized stations, empowerment of the concepts of civil society media and project financing of the media, information strategy aimed at online media, as well as the insistence on high standards in the allocation and the use of subsidies.

The realization of the conference was financially supported by the European Commission (Civil Society Facility programme), then by Fund for an Open Society within the Program for Independent Journalism (Budapest) and the Provincial Secretariat of Finance of Vojvodina.