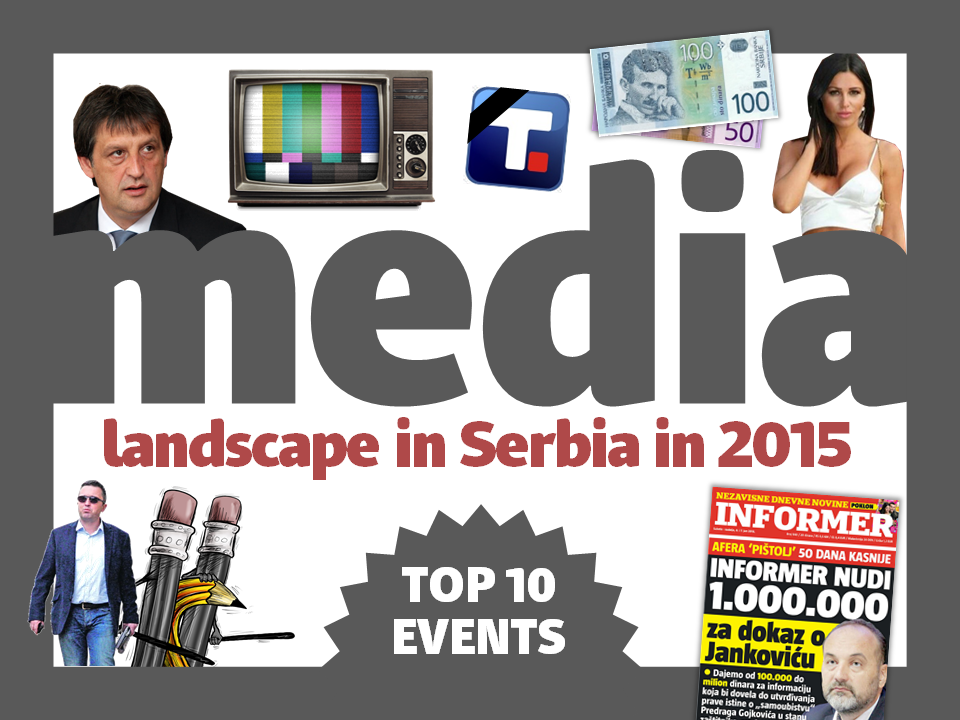 Media landscape in Serbia in 2015

Serbia fell considerably in 2015 on the Reporters without Borders list of media freedoms, primarily due to attacks on journalists, threats to media, but also due to insufficient implementation of new regulations. In 2014 Serbia ranked 54th among the world’s countries in terms of media freedoms and today it is 67th. Ahead of Serbia are Madagascar, Dominican Republic, Botswana… Reporters without Borders Executive Director Christian Mir told the website Cenzolovka that the government in Serbia is suffocating critical, free reporting and using pressure on media, often financial pressure through advertising, to influence editorial policies. “Censorship is not direct. It is not transparent either, but its existence is easy to prove,” assessed Mir. The problems faced by the media scene in Serbia are discussed in two extensive reports by the Anti-Corruption Council, published in 2015: a Report on ownership structure and control over media in Serbia and a Report on potential influence of institutions in the public sector on media through payments for advertising and marketing services. Below is a list of events that marked the year 2015. 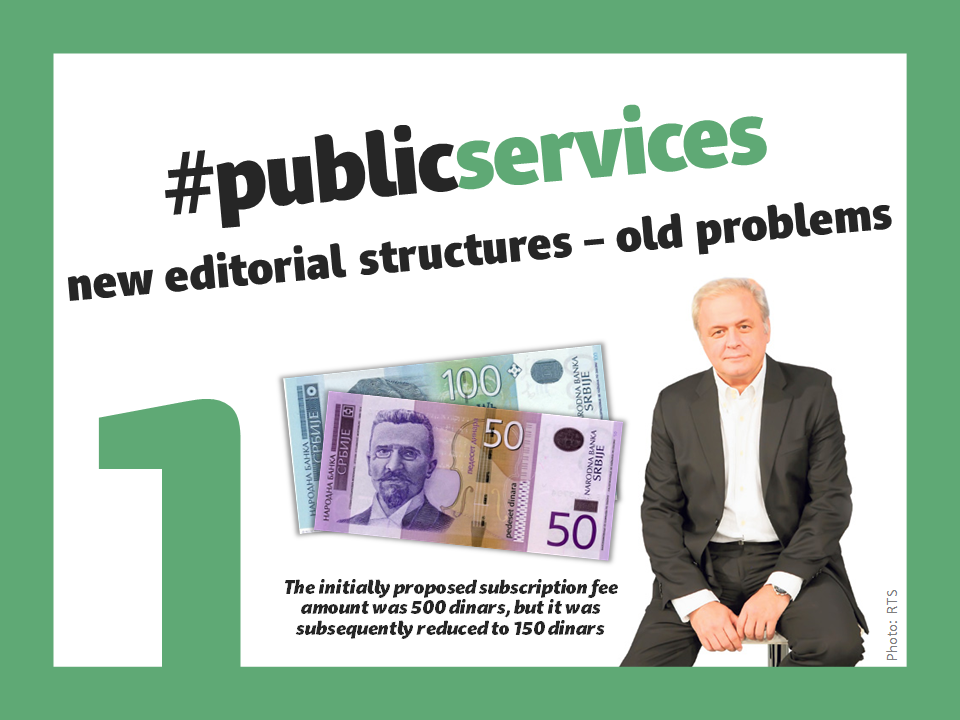 In May 2015 both public service broadcasters got new editorial structures. Former editor of Evropljanin and Politika Dragan Bujošević was appointed for the new director of RTS, while Slobodan Arežina was appointed for the new director of RTV. Although it had been announced that the public service broadcasters would in the future be funded through collection of subscription fees, it turned out that most of their revenues would continue to be provided through direct cash payments from the state budget, which could largely impair RTS and RTV’s independence and impartiality. A Novi Sad School of Journalism survey from March 2015 showed that in RTS’s “Dnevnik” (central informative program) –, two-thirds of politically marked subjects belong to the Serbian Progressive Party. Prominent members of the SPS party appeared in 12% of all cases, while those from the Democratic Party appeared in seven. All other parties took up the remaining 17 percent. The initially proposed subscription fee amount was 500 dinars, the highest amount admissible under the Law on Public Information, but it was subsequently reduced to 150 dinars. 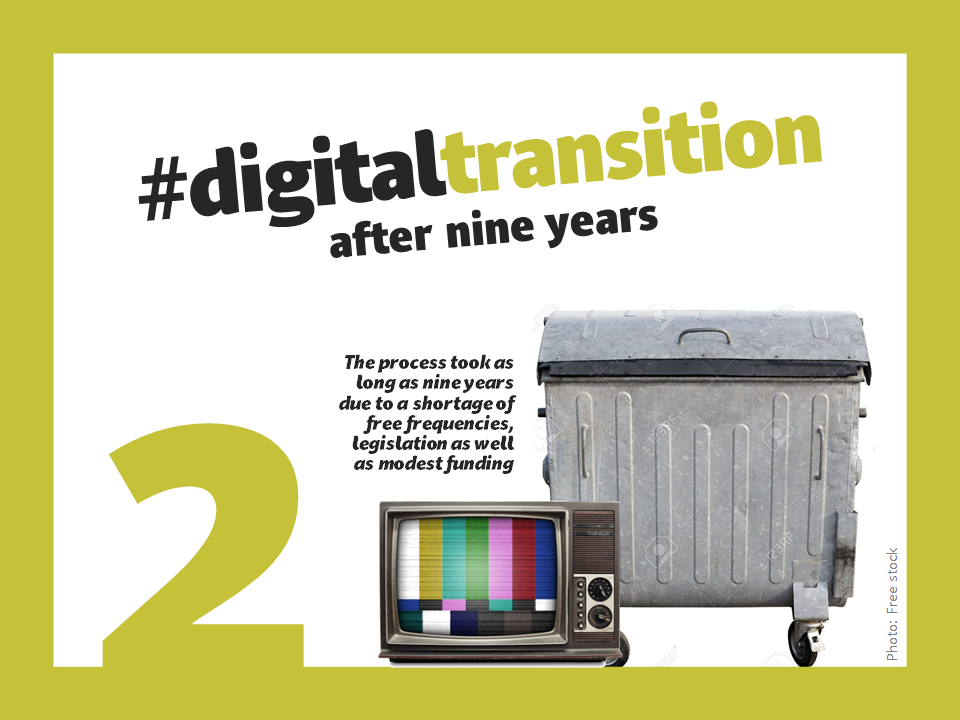 Digitalization of television and radio signal in Serbia was completed in the summer of 2015, the last deadline for completion of the process. It gave citizens an unlimited selection of television channels, with clearer and sharper image, higher quality of sound and a number of additional services, such as subtitles, delayed program viewing and electronic shopping. This issue had been discussed in Serbia since 2006, when an agreement was signed in Geneva and the state committed to carry out transition to digital broadcasting of signal. The process took as long as nine years and Serbia, due to a shortage of free frequencies, legislation as well as modest funding, remained one of Europe’s last countries with analog signal. Serbia was only ahead of Bosnia and Herzegovina, Belarus and the unrest-stricken Ukraine. Considering the fact that print media cannot withstand the pressure of competition from broadcasters, the state halved Value Added Tax on daily, monographic and serial publications and advertising in the press. 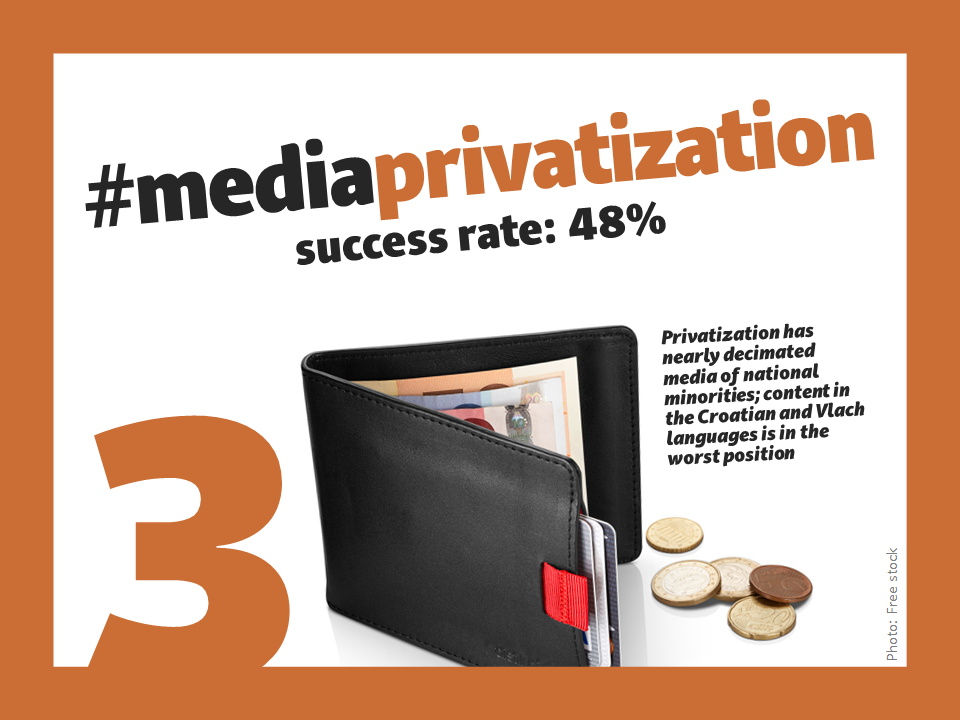 The privatization process substantially changed the structure of Serbia’s media landscape. The state was supposed to cede ownership of a total of 75 media outlets. Of that, 48% have been privatized. Privatization has nearly decimated media of national minorities; content in the Croatian and Vlach languages is in the worst position and will likely not exist beyond 2016. The National Councils had claimed that privatization could lead to the disappearance of information in minority languages, particularly in Central Serbia, diminishing the acquired minority rights, which cannot be reduced under the Constitution. Media privatization has given rise to “Serbia’s little Murdoch”, as the media labeled Radojica Milosavljević, a businessman from Kruševac, who bought eight local media outlets for a total price of 280,000 euros. 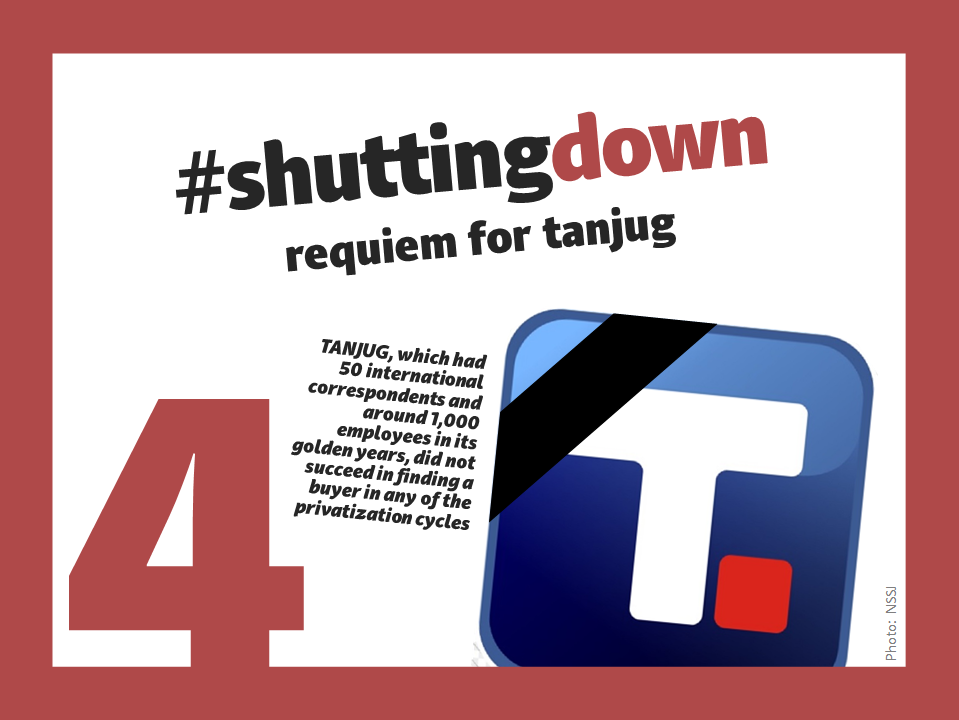 In 2015 Serbia bid farewell to several large media outlets, either due to privatization or market pressure. International Radio Serbia, formerly Radio Yugoslavia, shut down after eight decades. Its program in 12 languages had provided information to an international and local audience, but the Ministry of Culture and Information assessed that this kind of radio concept was outdated, especially in the digital age, in which shortwaves are a thing of the past. An even greater surprise was the shutting down of Tanjug agency after operating for 72 years. The Telegraphic Agency of New Yugoslavia, which had 50 international correspondents and around 1,000 employees in its golden years, did not succeed in finding a buyer in any of the privatization cycles. Many local radio and TV stations shut down for the same reason, among them Radio Sombor and Radio Zrenjanin. Radio B92, once a symbol of independent journalism, also disappeared. It was replaced by Play Radio, which airs a minimal number of words and an abundance of music. There is less and less quality media content: Danica Vučenić’s “1 on 1” show was cancelled and the fate of “24 minutes with Zoran Kesić” is uncertain. 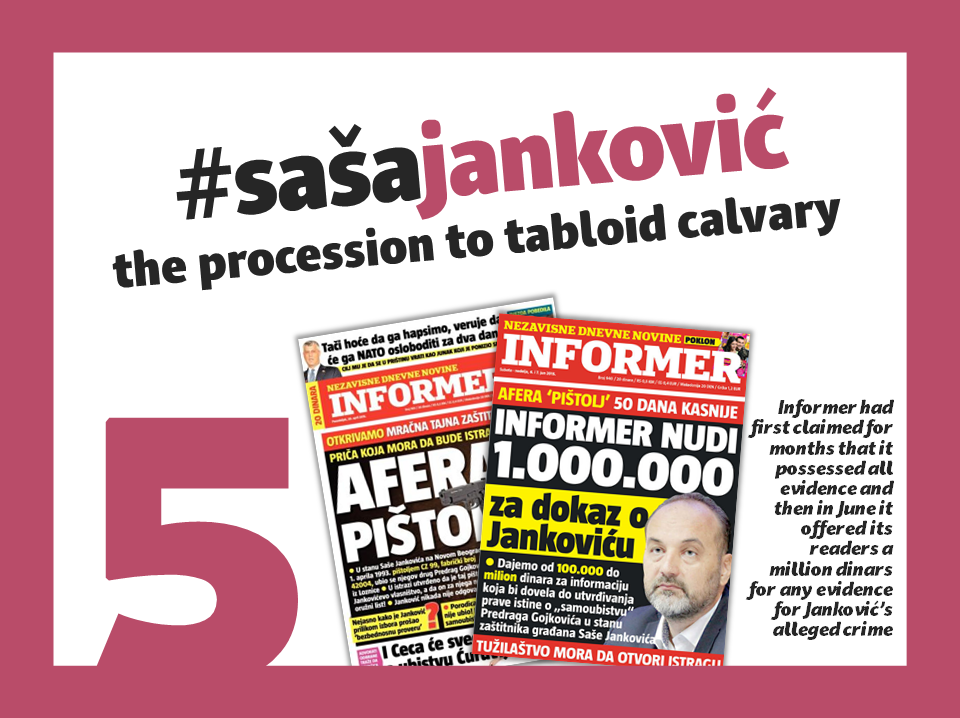 An aggressive media campaign against Ombudsman Saša Janković lasted several months this year, after which even the United Nations High Commissioner for Human Rights reacted. Pressure had started after his investigation into irregularities at the Military Security Agency in January this year and intensified after the publication of the latest annual report on human rights in Serbia. Independent Daily Informer in 2015 published more than 200 front pages suspecting and accusing the citizens’ protector of murder. Informer had first claimed for months that it possessed all evidence and then in June it offered its readers a million dinars for any evidence. In the corner of its logotype it continuously published a picture of the citizens’ protector, with the message: “Janković, respond”. 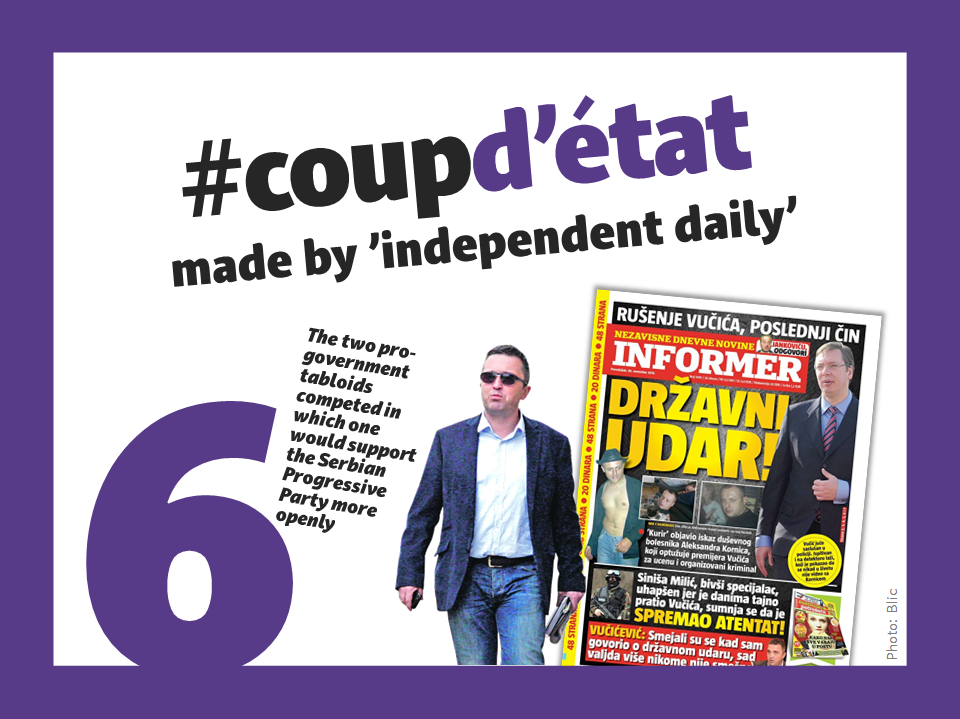 Blackmail, bribes, coup d’état, sycophancy, hostile takeover – these in short describe a conflict between Informer and Kurir. Starting with the previous parliamentary elections, the two pro-government tabloids competed in which one would support the Serbian Progressive Party more openly. While Informer spread its influence thanks to the lowest price and lowest instincts, Kurir tried to gain an advantage by buying the daily Politika. The conflict culminated after Kurir owner Aleksandar Rodić published an article dubbed “Srbijo, izvini (Serbia, I apologize)”, in which he admitted to using dishonorable means to support Aleksandar Vučić’s government. A series of grotesque events followed: special program on Pink, exclusive confessions, announcement of coup d’état, prime minister’s polygraph test, health minister publicizing private information from a patient’s health records… We can find the best name for this unsuccessful drama on the front pages of Nin and Vreme. The first suggestion is “Daft state” and the second is “Brain seizure”. 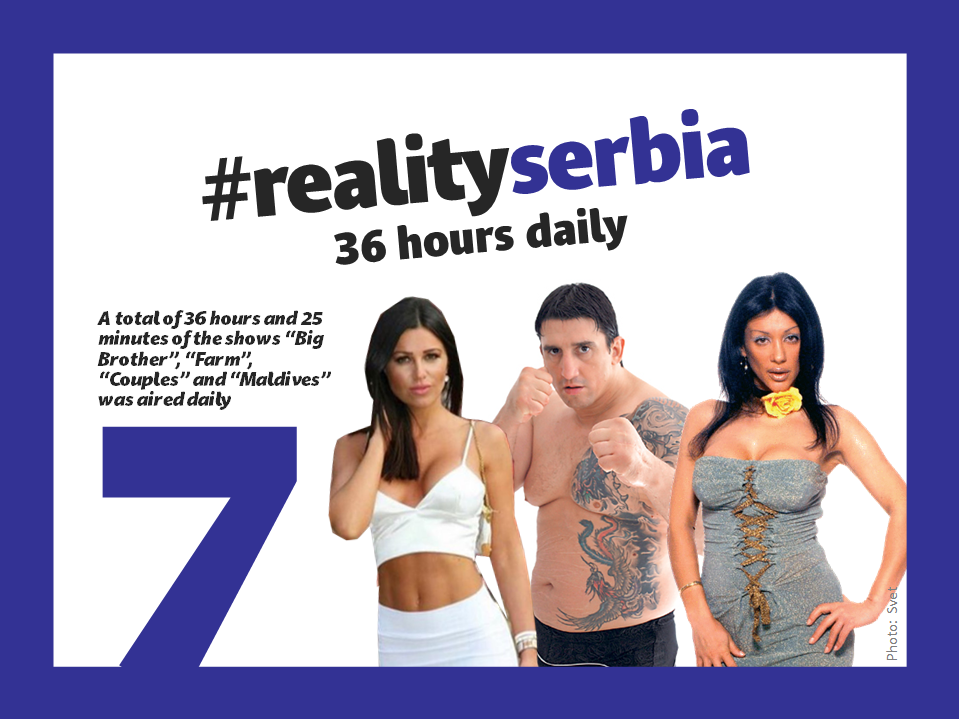 Television program in 2015 will be remembered by the record presence and ratings of reality show programs. A total of 36 hours and 25 minutes of the shows “Big Brother”, “Farm”, “Couples” and “Maldives” was aired daily on channels with national frequencies only. The entertainment and criminal milieu brought together in these television formats every day displayed profanities, physical assaults, scenes of sex and violence. Two opposing positions have been formed regarding the increasing ‘realitization’ of Serbia: the first, according to which every viewer should be given the opportunity to choose what they will watch, and the second, according to which trash program abuses the national frequency, which is by nature a limited resource. The regulatory body for broadcasters tried to prohibit the broadcasting of reality shows before 11 p.m., but its proposal remained only that – a proposal. 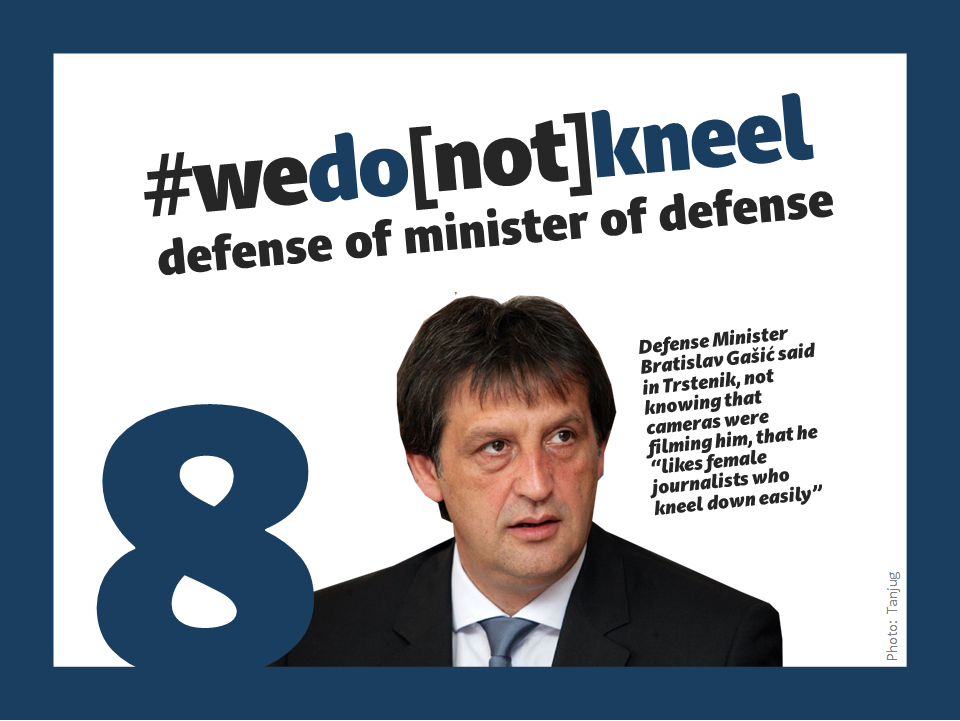 Defense Minister Bratislav Gašić said in Trstenik, not knowing that cameras were filming him, that he “likes female journalists who kneel down easily”. Namely, journalists were waiting for the minister to make a statement and some of them, including a female correspondent of B92, kneeled down to avoid entering the frame while Gašić was speaking. After the sexist commentary the minister apologized to the journalist, Zlatija Labović, and to the Serbian public, but the Kruševac Board of the SNS party issued a press release saying the journalist herself had provoked the minister by kneeling down. Prime Minister Aleksandar Vučić announced after the scandal that Gašić would be fired, but that did not happen as of the end of the year. Rallies are being held across Serbia on this occasion under the name “Journalists do not kneel – Prime Minister, keep your promise”. 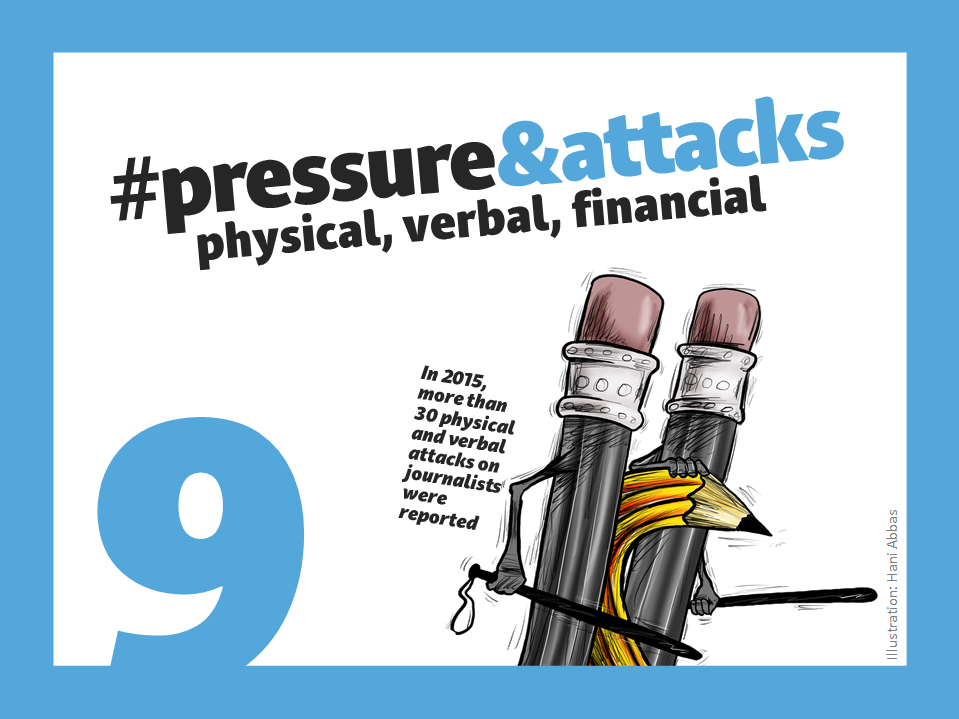 In 2015, more than 30 physical and verbal attacks on journalists were reported. Veran Matić received death threats over B92’s coverage of the arrival of the Holy Fire from Jerusalem to Belgrade; the journalist Stefan Cvetković from Bela Crkva was attacked by a man who threatened to kill him over his coverage of marihuana laboratories; Milan Đokić, journalist of Užička nedelja, sustained serious injuries after D.G. from Užice stabbed him with a knife during a press conference in the City Hall; Siniša Mali’s bodyguards seized a still camera from a Krik journalist and deleted a photo she had taken at a public place; B92 journalist Nenad Nešić was physically prevented from asking Commerce Minister Željko Sertić a question; a delegate of the Third Serbia party in the Novi Sad City Assembly, Aleksandar Đurđev, accused a journalist of Blic of working for the Croatian intelligence agency; Serbian President Tomislav Nikolić’s staff accused a journalist, based on the fact that her last name does not end with ić, of not being Serbian. 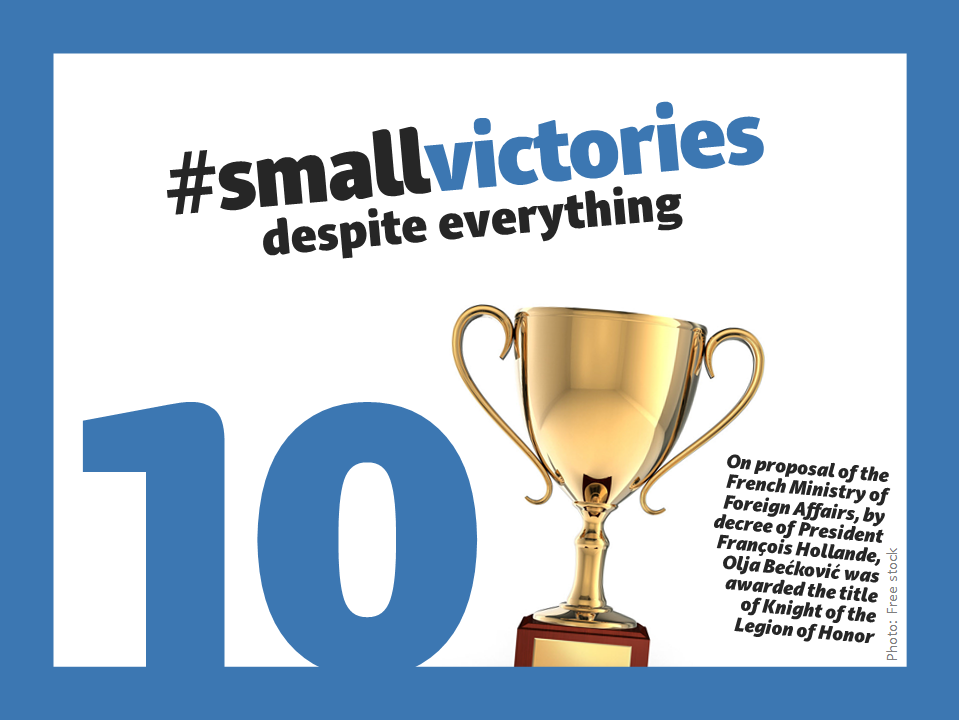 Not everything is so bleak. On proposal of the French Ministry of Foreign Affairs, by decree of President François Hollande, Olja Bećković was awarded the title of Knight of the Legion of Honor. The editor of the Insider show and journalist of TV B92, Brankica Stanković, was among the ten most inspiring women journalists in the world, according to Reporters without Frontiers. Miloš Teodorović and Ivana Lalić Majdak, authors of the documentary film “Witnesses”, are this year’s recipients of the EU Investigative Journalism Award. The award will be given until 2017 in each of the seven countries of the West Balkans and Turkey and the award-giving process in Serbia is conducted by the Novi Sad School of Journalism. Prestigious local journalism awards were given to illustrator and caricaturist Dušan Petričić, Politika journalist Jelena Popadić, Danas journalist Bojan Cvejić, Balkan Investigative Reporting Network team, as well as young journalist Milica Alavanja.