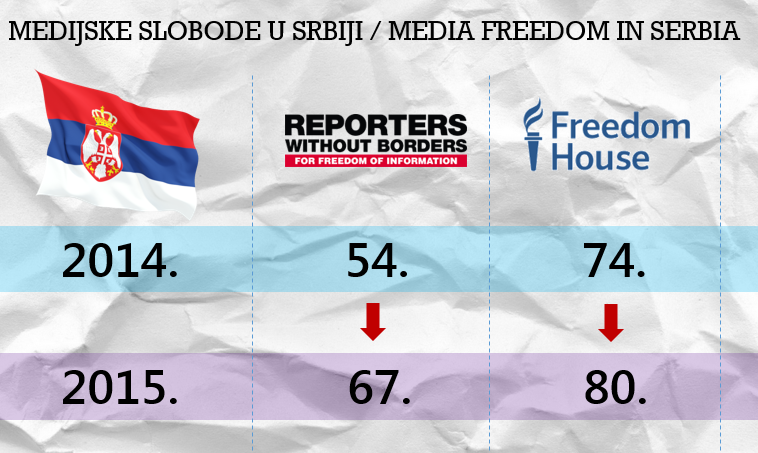 Bad days for freedom of the press

Censorship and self-censorship, “tabloidization”, unsuccessful privatization and non-transparent ownership are just some of the problems of the media scene in Serbia. The adoption of media laws in 2014 determined the standards that the media in Serbia should aspire. However, the media freedom is violated since then in different ways, and the reality has increasingly moved away from the image provided by law.

On this occasion, different statements of concern and disappointing statistics arrived during the past year, including those from the OSCE, the European Commission, the European Council, Reporters Without Borders, Freedom House, the Anti-Corruption Council of Serbia and the Ombudsman Sasa Jankovic, who himself became a victim of unprofessional and tendentious journalism.

The Journalists’ Association of Serbia (UNS) and the Independent Journalists’ Association of Serbia (NUNS) published joint proclamation on the occasion of World Press Freedom Day, in which they stated that journalism in Serbia has never been in a more difficult economic situation: “The fall of Serbia in world rankings of press freedom is not only a consequence of the material position of journalists, but also a consequence of the continuing practice of government and politicians to use the media for political confrontation. There is no free press in terms of poverty, corruption and fear of the authorities”.

At this year’s ranking list of media freedom wealthy Scandinavian countries took the best positions. However, the economic situation does not necessarily affect the level of democracy, which is shown by the examples of Namibia, Jamaica, Burkina Faso, Mongolia, Papua New Guinea, Madagascar and Malawi – these are just some of the countries that are poorer than Serbia, but better ranked. According to “Reporters Without Borders”, last year our country was at the 54th place by the freedom of the press, while in 2015 it was ranked 13 places lower. Moreover, according to this year report of the Freedom House, Serbia is listed among the countries with the largest decline in media freedoms.