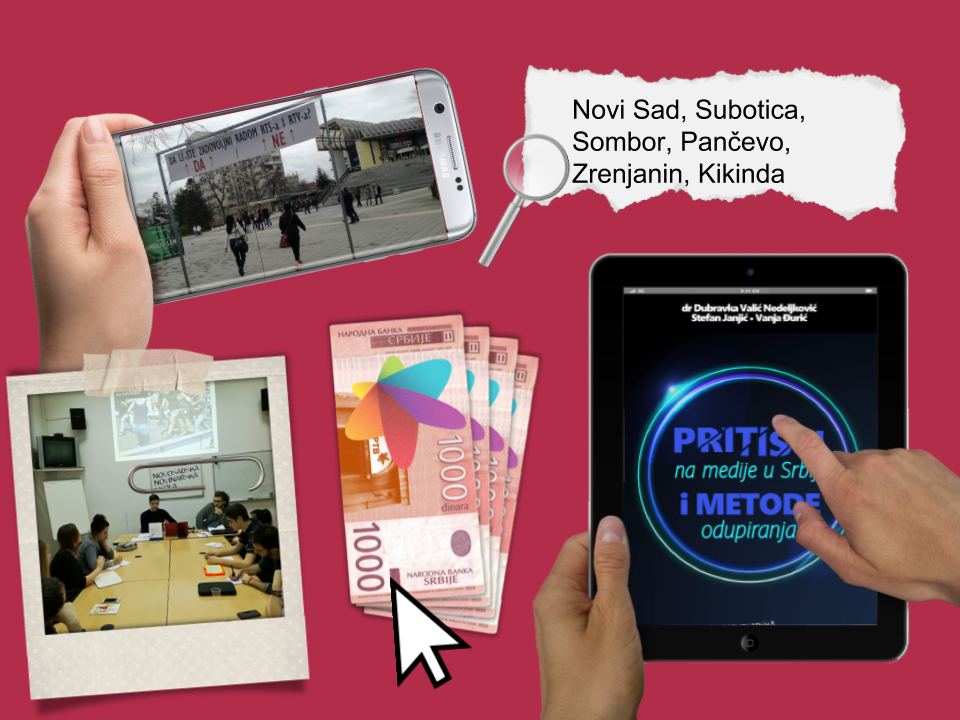 Censorship in local media has become a daily routine

Local media journalists in six towns in Vojvodina – Subotica, Sombor, Zrenjanin, Pancevo, Kikinda and Novi Sad – are continuously exposed to censorship, financial pressures of owners or local authorities, and some even by threats, shows research conducted by the Novi Sad School of Journalism and the Podrži RTV movement, together with students of journalism at the Faculty of Philosophy in Novi Sad, in the framework of the „Mission defence“ project.

Student research on the situation in the six cities will be published in our website. In addition to them, within the same project we prepared a manual “Pressure on the media in Serbia and methods of resistance“, conducted a financial analysis of the operation of Radio Television Vojvodina, organized a public action through which we asked citizens of Novi Sad whether they are satisfied with local media and PSBs. Speaking about the findings from student research on local media that, among other things, showed that journalists in certain cities choose absolute censorship rather than quitting, journalist Danica Vucenic says she can not defend people who do so.

“My personal decision is not to buy bread, I will struggle, but I want to respect professional standards. It’s my personal choice, but it’s also their personal choice to humiliate, follow the leader, lie, it’s their choice”, said the author of the TV show Kvaka 23, which can be tracked on the Fonet website. However, she also says that she understands that the economic situation in the media is never worse and that journalists work without contract, through outsourcing agencies.

The battle for a better working position of the employees on Radio Television of Vojvodina, immediately after the political shifts in that house in May 2016, was initiated by the Trade Union “Nezavisnost“, which back then gathered only dozens of employees in RTV. In the meantime, they have prepared about 200 lawsuits for current and former employees, due to the unlawful removal of ten percent of the salary. In addition, the problem that this union is constantly drawing attention to is employment through agencies.

“The agency increases our costs by ten percent and it would be cheaper to hire those people legally, but the honorary employees are such a good thing for manipulation and pressure, they are literally blackmailed”, noted the Chief Commissioner of the trade union for RTV Darko Šper.

He added that due to the insecure working status of people, they are ready for censorship and self-censorship. “A few days ago my colleague, who is a member of our Trade Union, called me, he is employed for a certain period of time. He was called by the editor who at the end of the conversation asked him – when does your contract expire? On summer, answered the journalist. So you should plan to extend it? I would love to. But, you are a member of Šper’s syndicate, it can make a problem to you! And he got out of the union“, Šper said.

Journalists did not become resistant to these patterns of behavior, which are repeated since the 1990s, and they do not notice mechanisms of resistance, noted Dubravka Valić Nedeljković, a professor at the Department of Media Studies at the Faculty of Philosophy in Novi Sad.

Journalist Danica Vučenić noted that other professions, such as the judiciary, are closely related to journalism. As a way out of a bad position, she sees the synergy of those professions. “The media can not be free without a free judiciary; they can not do their job without Šabić [without the institution of the Commissioner for Information of Public Importance], without the Ombudsman, without a non-governmental sector, without a free university educated by you who will replace us”, she concluded.

Danica Vučenić is also active in the Media Freedom group. The group was formed at the end of last year when the weekly Vranjske ceased to exist because of the political and financial pressures. Danica Vučenić believes that this is not enough and that it can not significantly change the attitude of the current government towards the media. Nevertheless, the Media Freedom group continues to work and plans new activities.