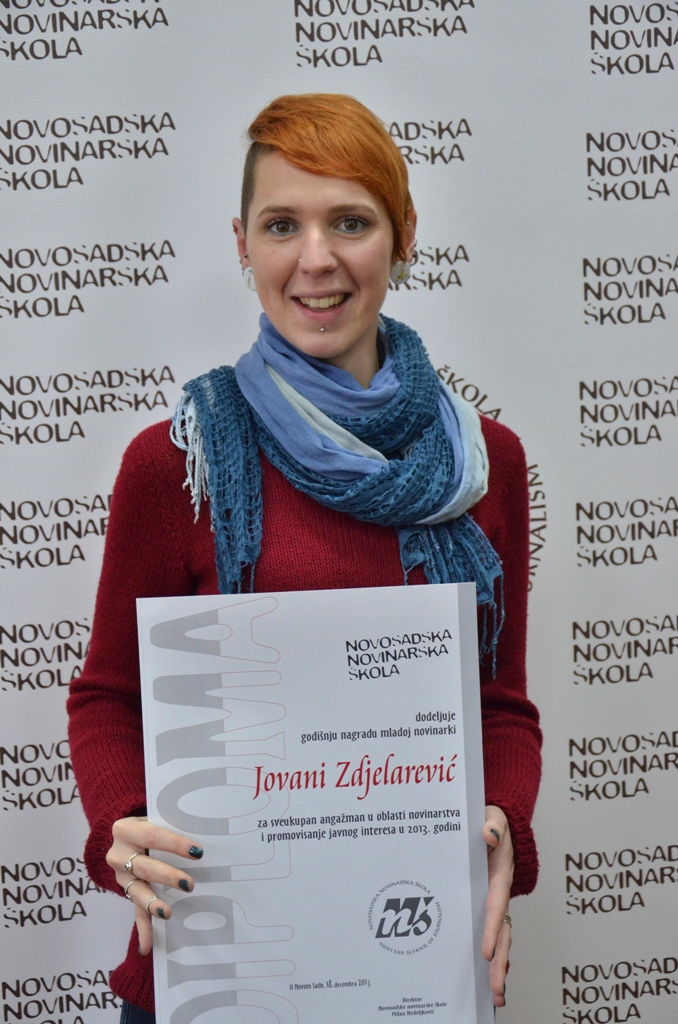 Jovana Zdjelarevic awarded by the Novi Sad School of Journalism

Jovana Zdjelarevic, won the award for the best young journalist by the Novi Sad School of Journalism (NSSJ). The anual award for overall engagement in the area of journalism and promotion of the public interest was awarded to her today at a formal reception in NSSJ, an organisation that gives this award ever since 2001.

“This is my first award in my career, therefore it is very special to me. However, I am especially pleased for the fact that I have received this award from the organisation which is dealing with the media, which follows the good examples of journalistic practice and whom I had no ways to trick,” said best young journalist of Novi Sad.

Jovana Zdjelarevic has graduated at the Faculty of Philosophy, University of Novi Sad, at the department for Media studies. During her studies, she worked as a journalist in a student TV show named “Dekodiranje” which was broadcasted on Radio-television of Vojvodina. This was her first work experience, and it lasted for one year. At the same time, she started her work in Novi Sad daily paper “Dnevnik”, in the City Chronicle desk. For a short period of time she worked at one radio station, so it can be said for her that she has experience in all three traditional types of media. Zdjelarevic has dedicated her work to promotion of democratic values, fight against extreme right and fostering gender equality.

A good portion of outstanding journalists of today from Novi Sad, Vojvodina and Serbia were at one point laureates of Novi Sad School of Journalism. Some of them are Igor Mihaljević, Maja Dragić, Žarko Bogosavljević, Asja Francisti, Dejan Stojčić, Branka Dragović, Dimitrije Vidanović and many other.

Novi Sad School of Journalism is a part of international consortium for development of capacities and monitoring of media reform in the countries of Southeast Europe and the Western Balkans. A specific value of Novi Sad School of Journalism is that it has a team that works continuasly on an analysis of media content in five languages. The goal of this research analysis is raising professional standards and preservation of journalistic ethics in the media. This year, the team focused on clutural programs aired on Radio-television of Vojvodina, and local radio and television stations in Vojvodina.

Beside the results of monitoring and research, it is especially important to point out the Media Literacy program. This program deals with the training of teachers in primary and secondary schools about the techniques of constructing and deconstructing media messages. Later on, in their classes, teachers transfer to their students the knowledge about critical reading of the media which they acquired  during the seminars.Overall,  Media Literacy seminar of Novi Sad School of Journalism has been attended by more than 300 professors and teachers from Serbia, 60 of which were educated this year alone. Media Literacy program of Novi Sad School of Journalism is the only program of its kind that has been accredited by the Institute for Advancement of Education and Upbringing of the Republic of Serbia.