Promotion of multiculturalism in media is completely neglected

Prof. Dr. Dubravka Valic Nedeljkovic and Norbert Šinković, researchers on the project Minorities and Media in the Western Balkans, presented on Wednesday, November 20th in the Novi Sad School of Journalism a research “Information on Minority Languages ​​in the Western Balkans” to media workers, journalists and editors of the regional and local media.

One of the results shows that topics of significance to minorities, reporting on other minority communities and promotion of multiculturalism and intercultural cooperation were completely neglected. In both Croatian and Hungarian language media, topics related to culture and the work of cultural groups dominated, along with a few other topics, such as politics, education and economy. Topics in Roma media were related to the Decade of Roma, as well as culture.

“Dominance of culture and cultural clubs can contribute to reinforcing stereotypes, as well as the majority’s perception that “minority life” boils down to tradition, dance and music“, as stated in the book.

The research project was implemented by the Media Plan Institute in cooperation with the Novi Sad School of Journalism, Journalism and Public Relations School from Skopje and independent analyst Natasa Ruzic. The project detects and describes the main problems in the operation of these media in relation to journalistic, social, political and financial challenges.

The research was prepared in the framework of the Regional Research Promotion Programme in the Western Balkans (RRPP), which is run by the University of Fribourg upon a mandate of the Swiss Agency for Development and Cooperation, SDC, Federal Department of Foreign Affairs.

You can view the publication via this link- https://novinarska-skola.org.rs/wp-content/uploads/2013/08/Information-in-Minority-Languages-in-the-Western-Balkans_EN.pdf 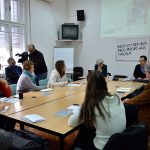 Tweet
Share
Pin it
Previous StoryYoung people from all over the world united against hate speech online Next StoryInterview – Željko Stanetić: If your words can cause someone to be beaten up, than that speech must be sanctioned