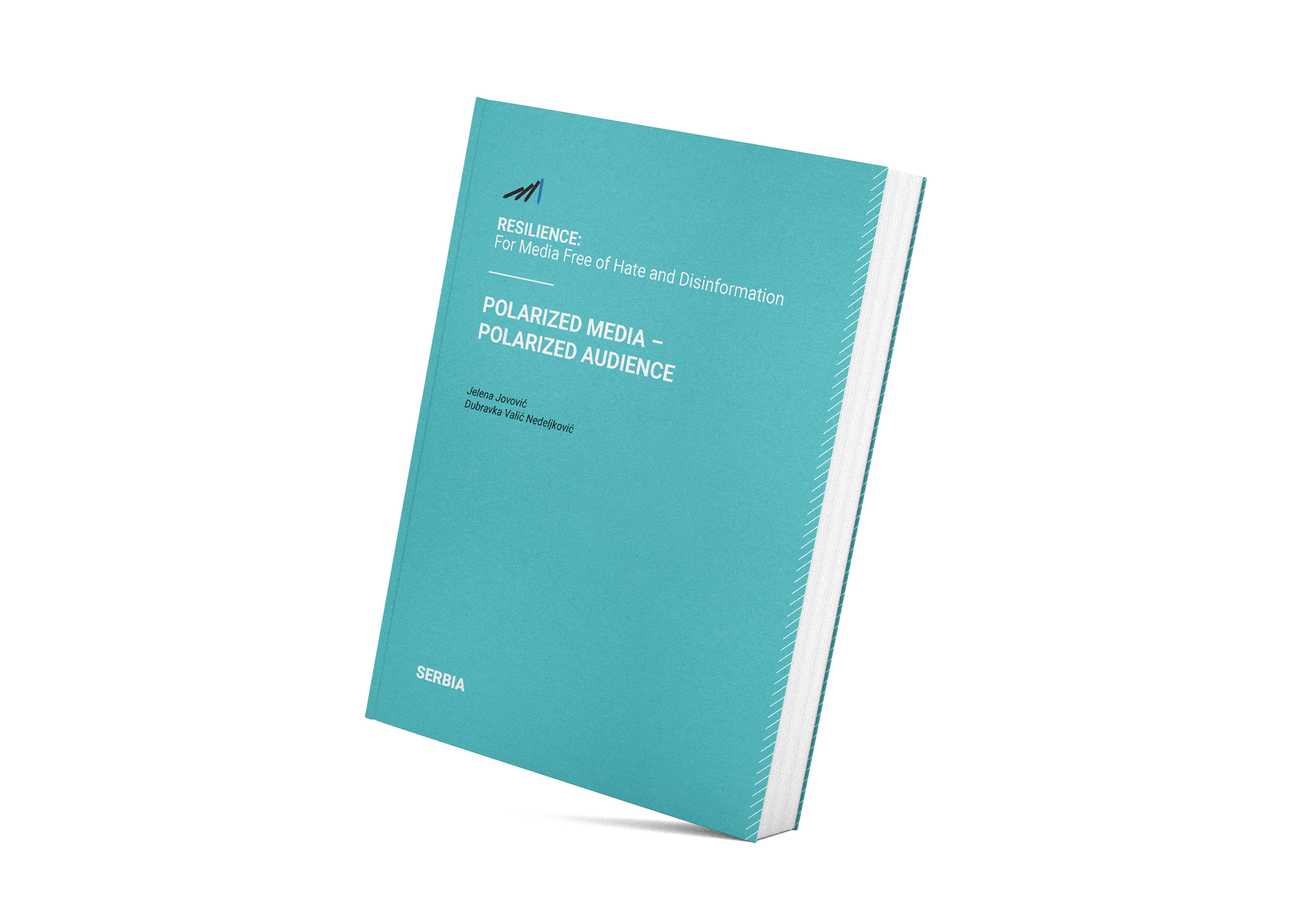 Complementing research on hate and propaganda models of media and communication and hate narratives conducted earlier as part of SEENPM’s Resilience project, this report analyses media trust and media gender issues in Serbia and offers a set of policy recommendations.

The study makes the following conclusions:

The media system of the Serbian (not so) young democracy is in a difficult position. In addition to highly polarized media, where the basis of their polarization is unequivocally established in their different political and ideological orientations (Valić Nedeljković et al., 2021), the results of the opinion poll and the focus group research on which the study is based indicate that the local media scene is also characterized by a polarized audience.

Traditionally, television stands out as the medium with the highest percentage of trust among the surveyed citizens. At the same time, tabloidization and a sensationalist approach to reporting on the coronavirus have left their mark on trust in the print media (a sector dominated by tabloid print media), whom the highest percentage of respondents do not trust. What is encouraging, in a way, is the relatively high level of trust in the investigative media outlets and the still modest but not negligible reach of the fact-checking portals.

The choice of specific media outlets that respondents singled out as the most or least trustworthy clearly illustrates the polarization of the audience. The same media are found at the top of both lists: The largest number of respondents singled out RTS (Radio Television of Serbia), TV Pink, Prva TV, N1, TV Happy as the media they trust the most because they publish accurate and verified information, due to impartiality in reporting, topicality of information, trust in the journalists who work there and openness to active audience participation.

TV Pink, N1, RTS (Radio Television of Serbia), Informer and TV Happy are the media that the largest number of the surveyed citizens singled out as the most distrusted because they are under political influence and spread disinformation, propaganda and hatred.

Even a polarized audience recognizes that the media in Serbia are not good promoters of democracy and public interest.

The public media service RTS only partially fulfils its legal obligations because, for quite some time, in its news programme, it equates the public interest with the interest of the political groups in power. The majority of the surveyed citizens think that there is a lack of independent and impartial media in Serbia and that the existing media are mainly under the control of political and economic powers, primarily the government.

A significant number of the surveyed citizens consider the media in Serbia under the control of political groups at both ends of the spectrum. At the same time, many of the surveyed citizens think that the media is free to collect and publish information on all the relevant issues. These findings reflect the media reality in Serbia: after twenty years of reforms, the country has managed to create a system in which the freedom of the media implies (only) that our media freely report on issues relevant to the group whose interests they represent.

Both the media workers in the focus group and the surveyed citizens agree that propaganda and hatred are ubiquitous in the media. The media instrumentalizes hatred based on gender, national and other stereotypes in order to realize the particular interests of the groups to which they are loyal for ideological or financial reasons. But as the media workers warn, the media is also abusing the hatred rooted in society to increase circulation, viewership, or reach, and again, in the end, to make a profit.

The position of women journalists in Serbia is especially difficult. As many as 95% of the surveyed citizens agree that women journalists are exposed to attacks, threats, insults and harassment because they do their job well. The journalists and editors in the focus group do not see gender prejudices and stereotypes as a cause of attacks but rather as a tool to discredit female journalists. Not their work—because that is difficult to discredit—but rather female journalists personally, where attacks are dominated by discourse strategies stemming from classic misogyny.

This publication was produced within Resilience: Civil Society for Media Free of Hate and Disinformation, a regional project financially supported by the European Union and implemented in the Western Balkans and Turkey by a consortium of media development organizations led by SEENPM. It is part of a series of publications on media trust and gender issues based on research conducted in Albania, Bosnia and Herzegovina, Kosovo, Montenegro, North Macedonia, Serbia and Turkey (all publications are available on the SEENPM website).