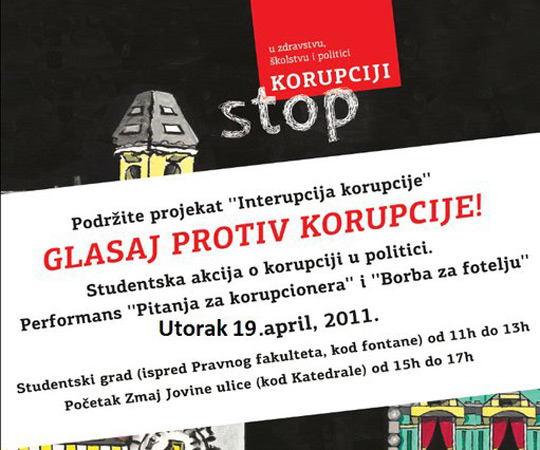 After a successful action on corruption in health care, a new students action against corruption in politics, the project “Corruption interruption” will be held on Tuesday, 19th April 2011  in two terms, and on two locations: from 11 a.m. to 1 p.m. in the campus of the University of Novi Sad and from 3 p.m. to 5 p.m. in the Center of Novi Sad (near the Cathedral).

The main objective of this student campaign is to raise awareness of citizens on corruption, a problem which is present in almost all spheres of society. During the action, citizens will have the opportunity to see a funny performance – a quiz “questions for corruptionaire”, when the participants will fight for the chair, which symbolically represents a function in politics, and to obtain informational materials about corruption in the form of blue envelopes, the symbol of corruption in our region. This is the sixth student action out of nine that are planned under the project “InterupcijaCorruption”, which is realized with the financial support of the General Directorate for Enlargement of the European Commissionand and the National Endowment for Democracy.