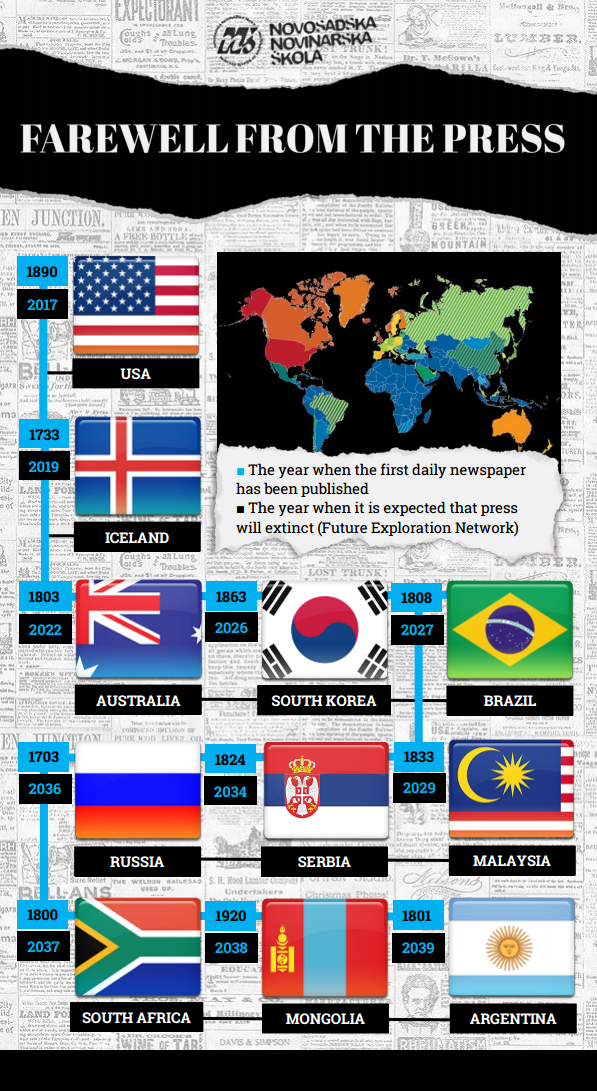 The future of print media: Will Serbian newspapers survive after 2034?

Organisation ’’Future exploration’’, dedicated to futures studies, predicts that the print media outlets will almost be extinct in the most developed countries of the world by the end of the next decade. The first tile in this domino effect will be US newspapers, and then will successively fall British, Icelandic, Norwegian and Canadian press. According to this study, Serbia will be one of the last safe heavens of the European press: 2034 will be groundbreaking year, after which the printed newspaper will only be browsed in Slovenia, Bosnia and Herzegovina and in the former countries of the Soviet Union.

Rupert Murdoch has made similar forecast in 2011, when he said that the publication of printed media will become unsustainable within ten years. Murdoch harmonized his business policy with his prophetic abilities: in the same year he began the project of digital daily newspaper “The Daily“, specially adapted for iPad. It was extremely cheap media outlet: money that readers spent for one average copy of the printed newspaper became enough to buy seven digital editions. However, the project was abandoned after only one year, since it didn’t attract big audience.

The famous US magazine “Newsweek” showed similar rashness. After years of falling circulation, the owners pompously announced “the last printed edition” at December 31, 2012. Next week, “Newsweek” was completely digitized, and this move was described as a revolutionary one among media experts. However, the digital “Newsweek” had a similar fate as Murdoch’s “Diary” – it lasted only a year and a half. Printed edition resurrected in March 2014, and in early 2015 “Newsweek” got it’s edition in Serbian language.

If the assumptions of the organization “Future exploration” are true, mankind will soon have to say goodbye to the press. It will be a hard blow for the fans of traditional media, but also a step forward for ecology enthusiasts.