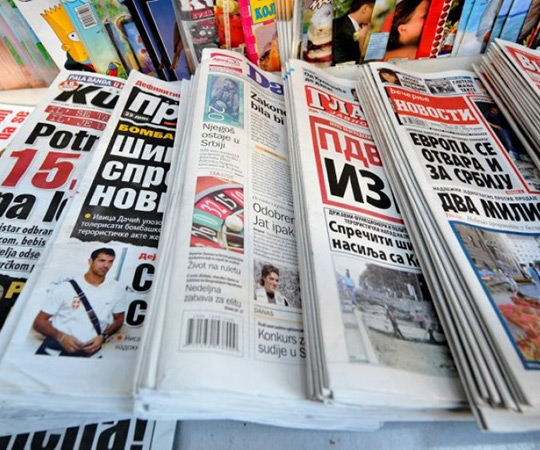 What do you think about freedom of the media in Serbia today?

Dinko Gruhonjić – president of the Independent Journalists’ Association of Vojvodina

“We have less freedom than in Milošević’s time. Not because Slobodan Milošević was a big fan of free press, but because the former historical circumstances were such that we had a few free media islands that were funded through donations. And therefore, the government had no influence on them. In my personal experience I can say that back in those days I can write more freely than I can today. Furthermore, only after the 5th of October have I seen how my editors, whom I respected very much, started to become political commissioners and started telling me how I should make balance.”

“In general, it seems to me that the freedom of media, compared to some previous state, which was not great as well, is collapsing. Therefore, the space for media freedom is getting more narrow and one could say that the process of collating is happening again. Therefore, some adjustments with some kind of centralized political will, dictated by the current government, and in this sense it is not one, but five steps back from what somewhere in 2000. was gained and what we thought was already a civilized standard that can not be compromised. Now we see that nevertheless, it can be compromised. “

„In general, I believe that courage necessary to speak about this kind of topic, especially from the editor himself, doesn’t really exist here, or so to speak, exists to very small extent, and no matter how much the topic is or isn’t interesting, but how much that is or isn’t in line with the profile of the ownership of the media.“

“Media is less and less free. The freedom of the media is an expression of the civil society, and citizens’ right to be informed. What they all teach us at numerous conferences and a number of preschools and schools, but what we see today is violation of freedom on all levels possible and in all possible directions. It is a destruction that goes into destroying institutions. The media are the institutions of civil society, the media have always throughout the history been those who have articulated opinions of citizens and if that fails, then it is very easy to manipulate.”