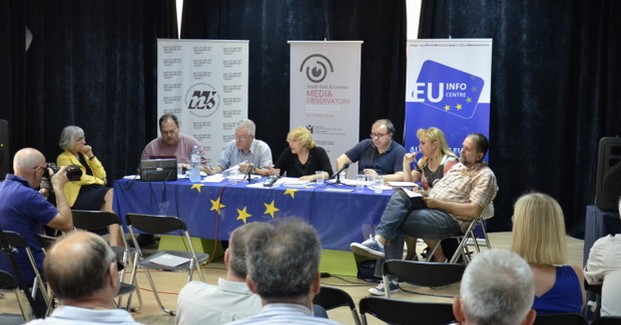 Who should be the allies of the press during their fight for reform of the media sector?

“Who should be the allies of the press during their fight for reform of the media sector?” was the key question asked by Jovanka Matic, PhD, at the public discussion “The journalism crisis as a crisis of media integrity. Where’s the exit?” held on July 9th in Belgrade.

Based on the results of the media integrity research, conducted within the framework of the regional project “South East European Media Observatory”, it was concluded that no political party in power has yet demonstrated consistent support of the media freedom.

The aim of this public discussion was to look at the current problems of the crisis of journalism as a proffesion from the perspective of the structural problems of the Serbian media system and determine courses of action of the media community towards unblocking the media reforms, where the first step should be the adoption of new media laws, as it was  promised in the Media Strategy in 2011.

The presented reseacrh “Media integrity matters  – Reclaiming public service values in media and journalism” whose authors are Jovanka Matic and prof. dr Dubravka Valic Nedeljkovic, is dealing with risks to the integrity of the media in five specific areas: – Development and implementation of media policy, the structure of media ownership, the structure of media funding, concept and operation of public service broadcasting and professional journalistic practice.

Research has shown that the process of integration of Serbia into the EU has had the greatest influence in shaping media policy in the past decade, and that there were changes of the media policy in accordance with changes in this process.

Most of the media is economically unsustainable and therefore vulnerable to political and financial pressures. For the poor and overcrowded, unregulated and non-transparent media market, the strongest pressures are coming from the business community and political centers.

The media does not have the mechanisms to resist this general economic entrapment.

Alternative sources of funding that existed in the 90’s – do not exist today. The answer to the question of why journalists can not get out of this trap is not because of the lack of journalistic courage, which they are often blamed for, but because of the absence of financiers who are willing to finance different kind of the media.

The moderator and keynote speaker at the event was Jovanka Matic, PhD and the panelists were:

*The project was implemented with support of the European Commission, and the organization of the debate was supported by the EU Information Centre.

Research for Serbia was supported additionally by the Open Society Foundation of Serbia and Provincial Secretariat for Culture and Media.