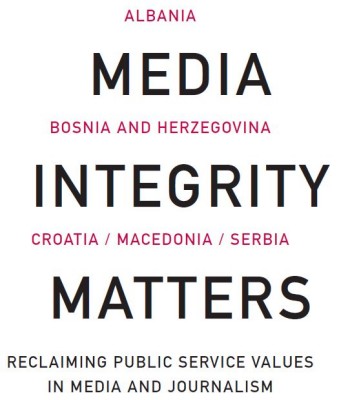 The book “Media integrity matters – Reclaiming pubic service values in media and journalism”, comprising research reports of the SEE Media Observatory, has been printed. Conducted between July 2013 and February 2014, the research was an attempt to address obstacles to a democratic development of media systems in the countries of South East Europe by mapping patterns of corrupt relations and practices in media policy development, media ownership and financing, public service broadcasting, and journalism as a profession. It introduced the concept of media integrity to denote public service values in media and journalism. Five countries were covered by the research presented in the book: Albania, Bosnia and Herzegovina, Croatia, Macedonia and Serbia.

This book and the project South East European Media Observatory have been build on the legacy of previous research and advocacy actions of the SEENPM, especially the 2003/2004 research and book on media ownership and its impact on media independence and pluralism. In fact, the present media integrity research has been an elaboration of the situation “ten years after.” Some of the researchers have been involved in both.

With this research and the book, the South East European Media Observatory moves closer to its goal of providing a regional instrument for media research and monitoring, and a regional framework for debates, consultations and coalitions among key actors, seeking to inform and influence media reform processes.

The reports in the book and effort invested in their preparation and presentation rest on the belief that media integrity matters. Public service values in media and journalism are endangered and therefore need to be monitored and protected.

The research results will be presented and the book distributed at the regional conference of the SEE Media Observatory in Tirana on 12-13 June 2014.

The research reports are now made public and are available online on web site as a book containing all reports and also as individual chapters (including the regional overview).

You can download it from the web site of the SEE Media Observatory at: link.

Tweet
Share
Pin it
Previous StoryMore than two-thirds of the population of Serbia would not report police corruption Next StoryWho should be the allies of the press during their fight for reform of the media sector?