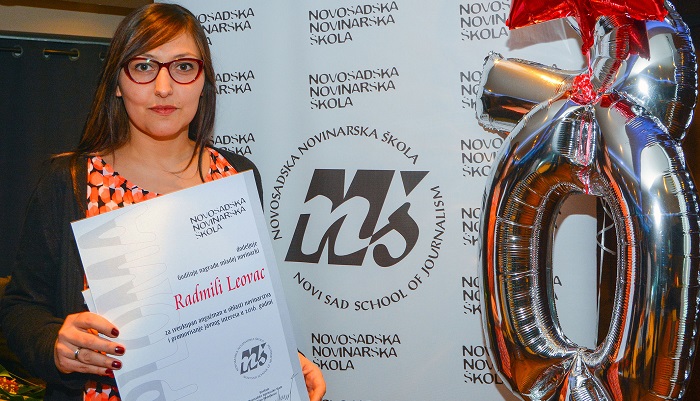 Freelance journalist Radmila Leovac is the winner of the NSSJ Annual award for the best young journalist from Novi Sad in 2016. Radmila was awarded at the celebration of the 20th anniversary of the Novi Sad School of Journalism.

“I was overjoyed, but also shocked when I was told that I won the award. Every time I think I should give up journalism, something happens to keep my faith in this profession: a colleague writes a great story, the other one comes to brilliant discoveries… This award motivates me in a similar way”, said Radmila.

Radmila Leovac, the winner, showed her journalistic skills in both traditional and new media, as well as freelance journalist. Her work is characterized by a wide field of interests – social and local political issues. Her article, published on the website Fairpress.eu contains in-depth analysis of the situation in the Serbian media sector, the overlay of the problems in relation to the subject of media freedom. Radmila is ready to learn, as evidenced by the fact that after graduation she attended various professional courses that contributed to her professional development. She is characterized by social commitment and respect for ethical standards.