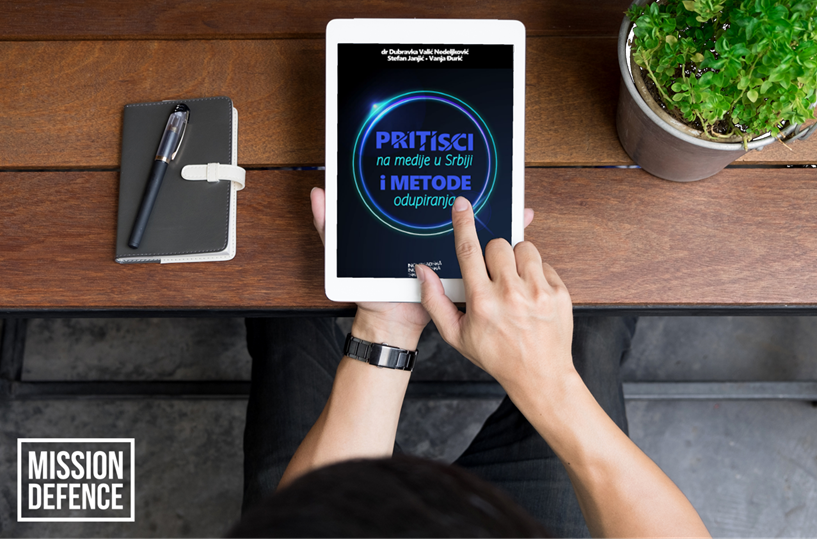 Mission Defence: How to defend journalism

In the framework of the project „Mission Defence: using activism and legal possibilities to resist the pressures on the media“, the Novi Sad School of Journalism published an e-publication “Pressures on the media in Serbia and methods of resistance”. It is dedicated to legal possibilities and activism methods to resist censorship and financial pressures. The guidebook is consisted of three segments:

[1] The first part is theoretical and concerns the censorship and the importance of the media freedom, its basic notions and key principles, with an overview of the tendencies that can be seen in this respect in Serbia.

[2] The second part contains an analysis of the legal possibilities that journalists and the media facing censorship and pressure can take to protect themselves and the public interest.

[3] The third part contains practical examples of the application of these rules, based on the experience of the “Podrži RTV” movement, as this movement has used a wide range of legal and creative activist opportunities to resist political pressure.

After publication of this e-book, NSSJ and the “Support RTV” movement, have organized a two-day training for students of journalism, which is followed by the beginning of the research on local media from Novi Sad, Subotica, Sombor, Kikinda, Zrenjanin and Pančevo that are financially dependent on state money. The training is thematically organized to follow the contents of the guidebook, which means that through four lectures and workshops participants are introduced to the legal aspects of journalism, open and covert forms of censorship, the consequences of self-censorship and financial pressures, as well as to legal and activist possibilities to resist pressure. The reports will be published on this website by the end of February.